The game we're watching now is unlike anything ever seen before.

If you like home runs and more offense late in games, this is your year. If you think baseball is devolving too much into a boom-or-bust game, with its nuances and athleticism sanded away in pursuit of those home runs at the cost of less contact, then this year is your worst nightmare.

“It’s going to change in two years,” said Houston All-Star third baseman Alex Bregman. “You watch. The high four-seam fastball changed the game. Now you see guys have already started to adjust to it. You have to adjust. You’ll see a return to guys getting more hits, putting the ball in play more.”

The cycles of baseball are difficult to predict, even in the short term. Bryce Harper, Manny Machado and Brodie Van Wagonen were the darlings of the offseason, for instance. What we do know is that the game we are watching now is unlike anything ever seen before, even in the Steroid Era. The ball is flying out of the yard like never before. Of the biggest storylines of the 2019 season, number one is—like so many flyballs night after night—a no-doubter.

Home runs pretty much sum up everything about how baseball is played this year. Home runs are up a staggering 19% from last year. Hitters are on pace to hit 1,076 more home runs this year than they did last year.

Home runs are so plentiful (too plentiful?) that teams have stopped running (the stolen base rate is the lowest in 48 years) and pitchers are more willing to walk a batter rather than throw a challenge pitch and risk a home run (walks are the highest in a decade).

Thirty-three players reached the All-Star break with 20 homers. The record for most players with 40 home runs in a season is 17, done in 1996.

Teams have hit five or more homers in a game this year 56 times. That’s already fourth all-time—and just four short of the record for an entire season. 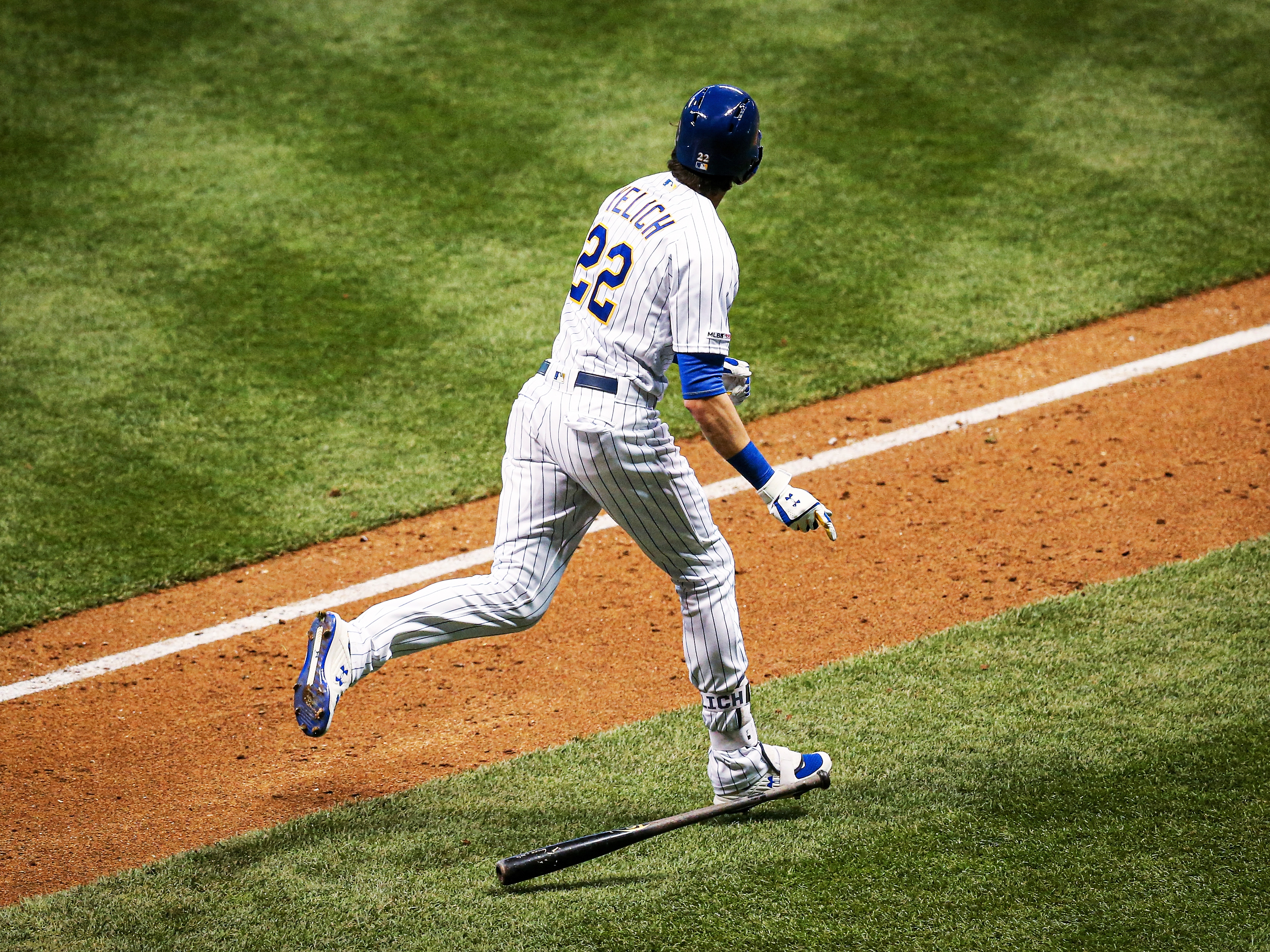 Yelich has 31 home runs, keeping him within range of becoming the first player not connected to steroids to surpass the 61 home runs by Roger Maris in 1961. Over the last calendar year, Yelich “won” the Triple Crown with 56 homers, 142 RBIs and a .348 batting average. Only three men reached those thresholds in an actual season: Babe Ruth (twice), Jimmie Foxx and Hack Wilson.

The leather is slicker. The seams are tighter. The pill is perfectly centered. The drying process has changed. There is plenty of anecdotal and rumored evidence to suggest baseball is using a ball with less drag in 2019, which means more carry.

Whatever the cause, we know the baseball is behaving differently. Yes, players are hitting more fly balls and they are hitting them farther. This generation of young sluggers grew up playing launch angle baseball, so no swing changes are required.

(Only five of the 33 players with 20 homers are 30 or older: Edwin Encarnacion, Mike Moustakas, Jay Bruce, Jose Abreu and Charlie Blackmon.)

But you only need to look at data such as these to know something is going on with the baseball.

You don’t need to hit it hard to hit a home run:

Home Runs Hit at 90 MPH or Less Through July 4

But when you do hit it hard, it goes farther than ever:

One more: fly balls hit at exactly the same exit velocity (103 mph, the average for a homer) this year and last year are 19% more likely to be homers this year. Nineteen percent!

This is all part of a trend in recent years in which the game is getting younger and younger. Why? A cynic would suggest it is because young players are cheaper. But the biggest reason is that because of better training and more and better amateur competition, young players are shortening the usual learning curve of how long it takes to succeed in the big leagues. Teams used to fear relying on young players. Now they trust them. And why not?

Highest Slugging by 25U Players

5. The Rise of the Twins

I’ve been telling you that in every year of wild card play but one at least one team makes the postseason the year after posting a losing record. This year Minnesota is the bounceback team. With the game’s youngest manager, Rocco Baldelli, 37, they are on a record pace for homers, they’ve cut their ERA by more than half a run and they are the best team in baseball in one-run games (14-6).

6. The Fall of Bullpens

For the first time in 50 years, relievers (4.51 ERA) are worse than starters (4.47 ERA). The heaps of innings thrown on bullpens (a record level again this year) are catching up to them.

The decline of relief pitching is directly attributable to slugging, not batting average. Slugging against relievers (.422) is the second highest in baseball history, trailing only 1930 (.426).

Cody Bellinger of the Dodgers and Yelich have been so great that they have turned the MVP race into a two-player race (with apologies to the phenomenal Max Scherzer, who never should be ruled out of anything). The hard part is trying to pick between the two of them.

If WAR is your bag, Bellinger holds an edge based on his defense. But if you believe a game is impacted more at the plate than in the field, then Yelich has the edge because he’s been better in the big spots.

No need to settle on a winner today, folks. Just enjoy the show these guys are putting on.

Trout leads the American League in homers (28) and RBI (70), has a career-low chase rate and for the first time in his career has more walks than strikeouts. Hard to believe, but he turns 28 in August and may only now be entering his prime.

Most HRs by a Centerfielder (First 1,152 Games)

Until last year, only once did three AL teams lose 100 games in the same season. Now we may get three 100-loss teams for a second year in a row, with the possibility of as many as five (Orioles, Royals, Tigers, Blue Jays, Mariners).

Here’s how the division leaders have played against The Bottom 5:

The increase in velocity in recent years has been overrated. What’s driving pitching (and strikeouts) these days is substituting more sliders and cutters for fastballs. A five-year trend has taken a huge statistical leap forward this year:

MLB Pitch Use by Year

Why is this trend happening? Part of it is simple math: batters hit .225 against sliders and cutters and they hit .277 against fastballs.

It’s also because the more hitters saw velocity—and now training against high velocity is common—the more they adjusted to it.

Think about this the next time you marvel at somebody who throws 95 MPH. The overall major league batting average is .252. It’s almost exactly the same (.251) against fastballs at 95 MPH and greater.

Five of the six teams who throw the fewest fastballs are in playoff position or near it: the Twins, A’s, Rays, Cardinals and Yankees. The Mariners are the other club.